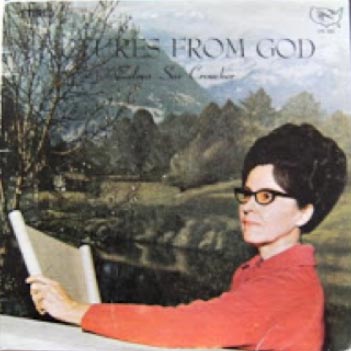 "Oh that Apostolic hair!  One of the first things someone notices about a sister in Pentecost is her hair!  Our hair is our glory and we maintain it as an act of love for our creator, Jesus!"

wow. i always wondered about those wonderful up-do's. Can i get a late pass? 40 years through this life of mine, miserable lost and undone with eyes long dimmed by tears blearily overlooking the bouffant beauties adorning who knows how many millions of record albums flipped through in haste, never stopping to appreciate, really appreciate what lies behind the style. Pentecost, huh? OK. but what does it all mean?

"Man is God’s glory, woman is man’s glory, and (this is key to avoid confusion), the woman’s long hair is her glory.  In the assembly there are three glories present:  God’s, man’s, and the woman’s."

So..let me get this straight... God's glory is Man. Me. Man. He's (god) all, "Check this shit out! This is my dude. AWESOME!!." Then I'm all "Check this shit out.. My Lady... AWESOME" and finally My Lady friend...She's all "What the fuck? You (god) get someone like tangible and complex, and You (husband) get someone squishy and lovely to behold, and I get a lousy head of hair? That i have regardless. That i have to comb, brush and untangle. That gets down in my underpants. That is so long it touches toilet seats and bus benches and carries worlds of bacteria. GREAT. Fucking glory glory hal-e-fucking-looo-ya!"

Why the length..what does it matter? I ask. To which the internet tells me:

"It is one of the more elementary signals that she is female, a signal which (unlike her genitals) is for public display. When women begin grooming their hair in ways that invite others to misidentify her as male, that amounts to a profound departure from a culture that uses things like hair-styles to differentiate, even to exaggerate, the distinctions of the sexes."

"When Sinead O’Conner or Britney Spears shave their heads, it is instantly recognizable as a repudiation of something ordinarily feminine."

Weird. Right? It gets weirder the deeper one digs into inter-pentecostal debate regarding veiling of a woman and/or a woman's head for services and prayer, whether it's o.k. for a man to wear a mustache among the congregation and it's all thanks to Paul, for apparently he laid down the law in Corinthians 10 or 11 or some-such..and the interpretations run-amok.

OK...so back to the task at hand. that is to bring some far-out audio delight salvaged by the Landfill Rescue Unit from a time and place forgotten, but likely from a fairly recent trip to the central oregon desert.

Zelma Sue Croucher's "Pictures From God" is an LP in a class all it's own. The form invites charm, boredom, intolerability and hilarity throughout. As a whole it's not a good combination so i'm restraining from posting the entire record. It is described in the liner notes as inspirational recitation without a note. Meaning, i suppose, it's off the cuff.

The story goes...Zelma was taken ill and:

"After days, weeks and months in and out of the hospital and several surgeries, the Doctor who was one of a team of Doctors who examined the Astronauts as they returned to earth, came into the room and told her they could do no more for her than they had already done, so they were going to release her.....Supposing her days to be few, she said in her own words and i quote, 'Lord raise me up and i'll serve you the rest of the days of my life' she realized she needed the help of the great physician also in body mind soul and spirit"

Zelma was shown a scroll of pictures by the man upstairs, of her life, that she freely shares with us in vivid detail.

I've chosen the darkest, and thankfully the shortest, of her recitations as an introduction. I have a feeling this will be the first of several Zelma posts as each listening poses more questions. Here she strips it down to the core. We should endure this short trip on the rotating ball with all it's suffering, torment and gloom knowing better places lie ahead...maybe places where women are allowed to wear their hair in whatever style they like.