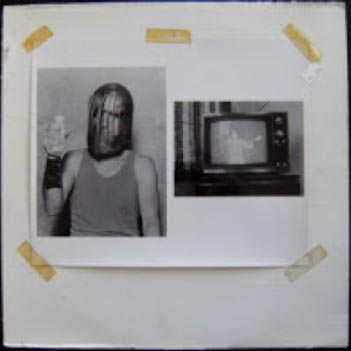 first off, i'm going to make an admission. I did not find this at a thrift shop. I initially wanted this forum to center very specifically around items i brought home from a day's outing at the junk shops. In fact, and in an ideal disc0paul world, it would have been only gut bustingly funny or perverse or truly outstanding CHRISTIAN related items only purchased at thrift shops. I wanted to use the name Kwazy Kwistians, but, thanks to someone looking out for my best interests i was informed there were a zillion google hits for that word combo already. I could have carried this out under those rigid standards for a good while, but i knew i'd eventually peter out and have to re-define the whole shebang later on. Maybe i'm just making excuses and winding my logic around because i found an OUTSIDER private press monster yesterday that I can't by any stretch of the imagination directly link to christianity, though there will be an indirect aside to the day's events that is highly coincidental and does center around a piece of vintage vinyl jesus music from portland that has occupied way too much space in  my brain the past few weeks.

4/18/09. I woke up somehow knowing it was going to be a good day. the forecast was for highs in the 70's and before 10 am i already had invites for events all over town. I don't know how to say this without sounding like a shithead, but fuck it..maybe i'm just a shithead. none of the events i was invited to, or planned on going to on my own, seemed very, ummm...how do i say this...COOL? I don't want to imply, though, that these weren't cool on some universal standard, they never seemed to fit with MY idea of cool (and i'm not married to cool either...feel free to insert your own adjective..hip...rockin'...punk rock...awesome...). This day was to be a full on humility fest. what's more i was looking forward to going around doing all this totally un-cool stuff and getting multiple hours of bike riding in at once. Started off with a free "gig" at noon in the burgeoning mississippi neighborhood. Hmm..street fair type concert? ech... no thanks. that's where my mind goes. I got the invite from my friends "THE NEAT". How to explain this without sounding righteous? These guys are like family and i've seen the founder come up from a teenage wastoid weirdo and i've always respected his work ethic and sense of humor and how he positions himself in the world as an individual, BUT, i have always felt there was a certain necessary element of COOL charisma missing from the presentation of THE NEAT...if they were to succeed as the power-pop darlings they were positioning themselves to be. Long story short, they blew me away yesterday. they blew me away with talent and humility. my expectations were not high and i could have wandered off at any point during their performance and they wouldn't have noticed but i was fully engaged in their songwriting and stood among a small crowd for the full 9 or 10 song set. It was very satisfying.. how cliche would it be to say the music speaks for itself? These guys work hard and it's showing. i'm really happy for them. 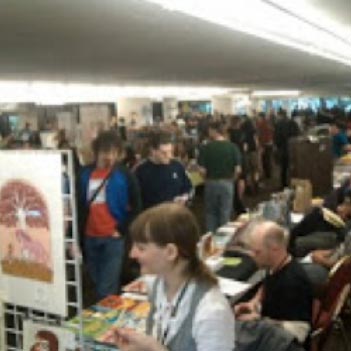 Next up was the Stumptown comic convention and i won't waste too much time on this. I'll just say i didn't think it would be cool at all, but the reality again surpassed my expectations for brief periods during the whirlwind tour of GEEKdom. Dame Darcy was there and her exchange, with my co-conspirator in defying cool for the day and I, was weird and wonderful (emphasis on weird) and we inquired about her appearance on BLIND DATE and other tidbits that didn't have anything to do with comic books. We wandered the aisles aimlessly from that point on feeling like fish out of water. philosophizing mostly... about coincidences... and other matters... with the backdrop of uncomfortable people presenting their dialogues of discomfort for a milling multitude of other uncomfortable people. Again, expectations not high, but expectations met and exceeded. i left very satisfied.

The final episode of the day was to be the NIGHT OWLS record swap at the Eagles Lodge on 52nd & Hawthorne. These things fuck with my ego like nothing else. I don't really get it but from the moment i walk in I feel ENTITLED to find something outstanding at basement bargain prices. The last few times i've gone i've left empty handed and with an unprecedented anger at all the douch-y record douches with their boxes of crappy no-deal crap so was on the fence about even going yesterday. Luckily my co-conspirator had just enough interest to sway me into going...with no expectations. I made the rounds with my usual disdain, scoffing at high prices (that were incidentally all lower than i'd have priced anything at...isn't it funny how that works?) and saw a few things i'd like to have; minty sir lord baltimore LP, corrupted LP, ISM first LP, but not enough to shell out $40, $20, $60 respectively. I quickly became bored and my sense of entitlement subsided and the crowd started getting on my nerve so i headed toward the door empty handed. I saw someone behind a table near the door i wanted to talk to, a certain Mistress Dawn, so i absently flipped through a couple of her boxes while chit chatting. Something caught my eye first in her dollar box. It was a copy of NUN-PLUS' Ljubimo LP which i had only recently been familiarized with. 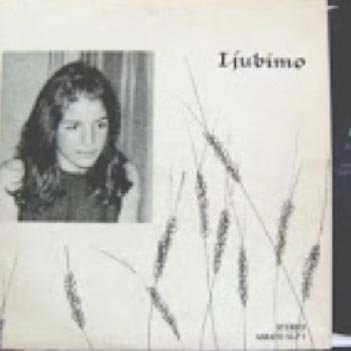 I found a copy at Evergreen thrift in milwaukie a month ago. It's got a great track with 60's beat electric guitar and some weird electronics bookending one of the other songs. Turns out this is a mid range private press sleeper in the xian vinyl collecting circles fetching as high as $60 at auction. A week after i found my copy i heard it DJ'd at the same Eagles Lodge hosting this record fair (coincidence). Friday, the day before yesterday, I went slumming on Foster road and went in a crappy looking antique store on the off chance they would have records or some vintage godzilla ephemera and sure enough they had a thousand or so moldy records in boxes on the floor. NUN PLUS was the first record in the first box i looked in (coincidence)! Sadly it didn't have the record inside but the sleeve was in immaculate condition so i looked through the rest of the junk hoping the LP would be loose in the piles...nope. I bought the cover anyway because it was in better shape than the one i found last month and i figured i'd just throw it in for the auction winner as a bonus when i sold the initial copy on Ebay. So back to the swap. The copy in Mistress Dawn's dollar box had a GIANT 3 in sharpie on the cover.... devaluing it, essentially, to the point of it making sense it was in the dollar box. well...i was overjoyed because i had this extra cover at home. Expectations met and exceeded. THEN: As i was saying my goodbyes i saw this odd record in one of her other boxes that had a 8x10 photo scotch taped to the cover. Her price tag only said "priceless...ask me". I asked. She said it was terrible. She said she couldn't explain, really...just that it was awful. 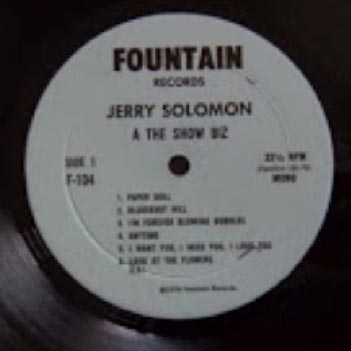 I looked at the label...hmm..never heard of this artist but this just looks RIGHT. 1978? Fountain records? covers of blueberry hill and i could have danced all night? This had all the earmarks of a monstrosity. I needed it. I asked what priceless meant to her and she said $5. YES. I got it home and put it on before doing any research. Terrible. couldn't have hit the nail more directly on the head. Terrible wonderful though. Not Terrible horrible. I did a little digging around on the net for Jerry Solomon and found a myspace page but not much else. turns out the myspace page was a tribute to his first LP from 1971. This guy's stuff has long been some of the most collectable OUTSIDER "psych" (i'm hesitant with the word psych because it doesn't really fit...i mean i think if i heard this on LSD i'd lose it..in a bad way). A little more probing and asking authorities have shed light on several YOUTUBE videos of Jerry and write-ups of his first LP on the Acid Archives website. Below you'll find my favorite track "on the way to nursery school". This is a LIVE lp. the myspace page contains the 1971 LP which is a studio effort...it's infinitely more accessible....

Finally, my sweetheart and i went to see the Wrestler to end the night. It hit home with the perfect amount of melancholy to compliment the whole day's struggle to find contentedness outside of expectations.